Having heard about the cats Jenny was making on our Zoom meeting she has sent me a photo. She says... 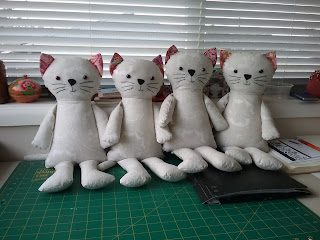 I have had a productive time and finished the grand nieces cats. Thought you might like to see the finished product.
Still working on their clothes and of course a little quilt.
Posted by Ma Betty at 6:25 AM No comments:

I have a folder full of orphan blocks of all shapes and sizes so this week I have sorted them into colour themes and started putting them together. You might even recognise your own block amongst them. I get them from everywhere, some from our group when there is an odd block left over, some from my own practice blocks and others inherited or donated from other quilters over the years.

First the Green and Cream Quilt

I decided that all these 9 blocks went together and would all be the same size if I just added calico borders of various sizes to some of them. Some needed minute borders while those for others were quite wide. 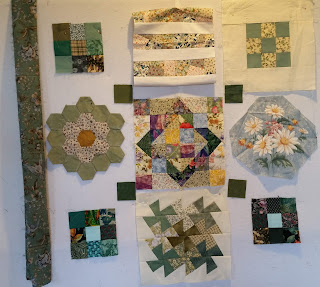 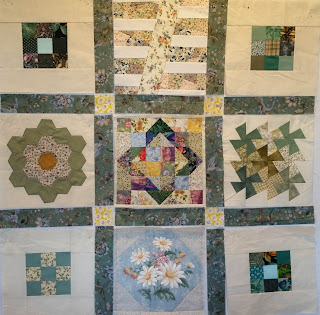 I have now added a narrow dark green border around it and chosen the next 6" border but am waiting for my polar fleece order from Spotlight to arrive so that I know exactly what width I have to work to.

Second was the Aqua Blue Allsorts

This time I decided to experiment with a haphazard layout rather than trying to make the blocks all the same size. And I even decided not to measure anything except the 1.5" frames that appear in places. Unfortunately I forgot to take a photo when the blocks were just scattered on the design wall but here are a few shots. 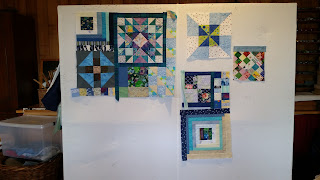 Here it is waiting for trimming both sides then adding borders and backing of some sort. I think I would like a strong aqua border first to frame it then after that who knows. 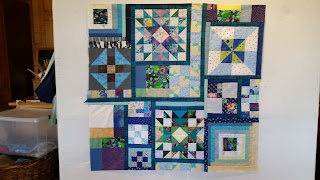 I have lots of other blocks and am just going to keep going with different colour schemes. I am also using some of my cut squares to fill spaces where necessary so am using up lots of scraps.

I think each time we have a new block to try it would be fun to choose a colour scheme so that all the orphan blocks resulting from my experimenting could eventually be put together as a "sampler" quilt.
Posted by Ma Betty at 2:32 PM No comments:

After some days of flaky internet I am now able to post Jenny's lovely show and tell photos. I relate well to the pussy photo. I also had cats and they loved to lie on top of half done jig saw puzzles and flick pieces with the spare paw. 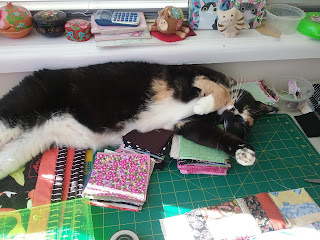 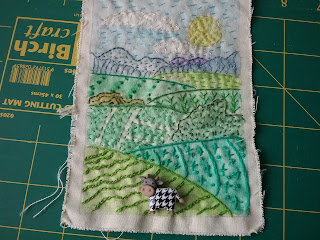 Thanks Jenny for your inspiration.
Posted by Ma Betty at 7:30 AM No comments:

Betty's latest show and tell is a finished quilt, quilted, bound, labelled and photographed in time for the virtual birthday celebrations. 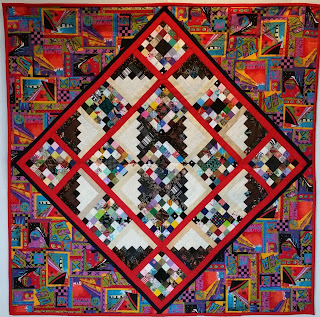 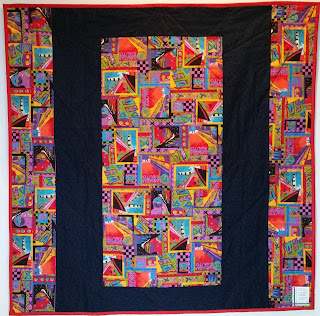 I saw a picture in a magazine of a bag made of on-point squares and decided to work out how to make one. After some drafting on graph paper and resorting to sticking together paper squares(!) to get the sequence right, I made the smaller (4 " squares) bag. That looks OK but it is only big enough for a paperback book and has no 'gusset' for expansion space. Then I did a bit of browsing and found various patterns online (of course!) so I made the second, larger bag, using 5" squares and adding an extra row of squares. That is still not a lot bigger but definitely able to accommodate more bulk thanks to the gusseted sides. 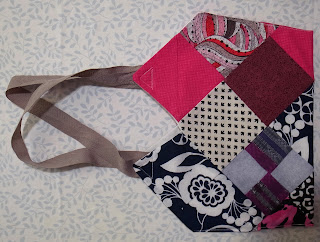 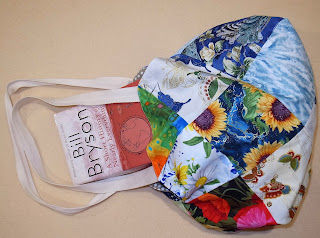 During the Zoom meeting I also showed my current hexagon project, and some handy tools. The LED light is great for working in the evening, while the beewax candle makes it a lot easier to thread needles when the thread is dragged across the beewax. The takeway cup holds my reel of thread with the end coming out the spout (arrowed) - no more runaway reels. 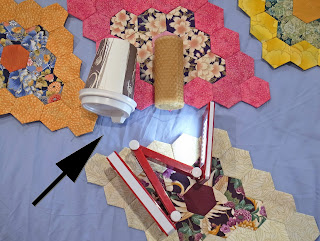 Well after a lot of work in the chook yard, a long shower and a well deserved rest I headed upstairs to finish off my first Covid quilt top. 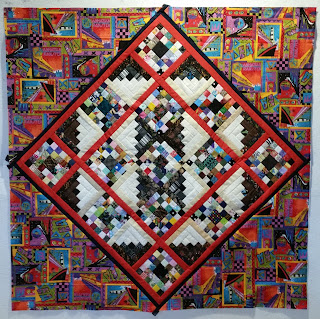 In an earlier post I put up the beginnings but once I knew who the finished quilt was to be for it has all gone together quickly. Upstairs now to sandwich bind and quilt it. It has to be finished for next weekend.
Posted by Ma Betty at 2:37 PM No comments:

Show and Tell from our Zoom gathering

Today's Zoom gathering was great. Thank you to all those who joined. I think we are now learning about how to iron out glitches on the run.

People had a lot of show and tell so here are a few...

Jeanette (WA) has made some bags. 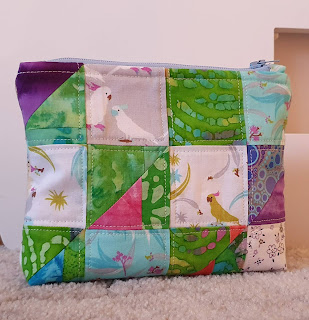 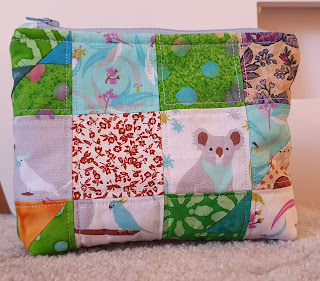 She and Graham went out to their front gate for Anzac morning with a candle and flag. 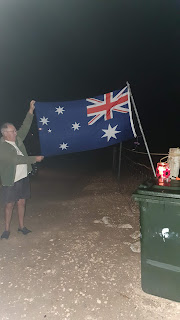 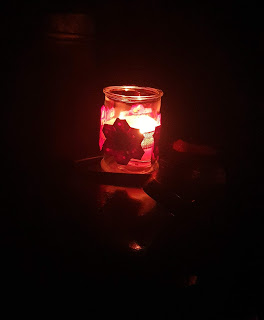 Christine (Noosa) is progressing with her clam shell blocks, many of them embellished in some way. 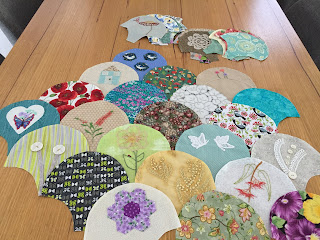 Karen G (Woolongong) has been experimenting with folded stars. 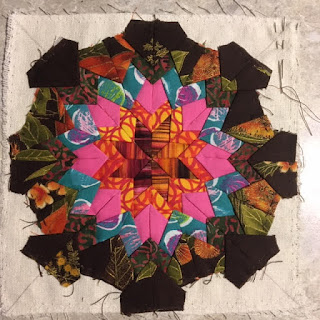 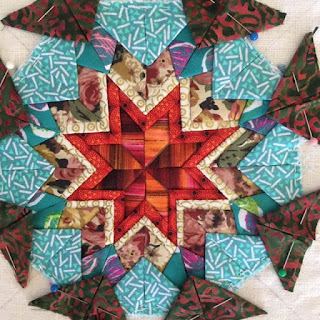 While Rosalind (her daughter) has been making some Eye of God hangings. 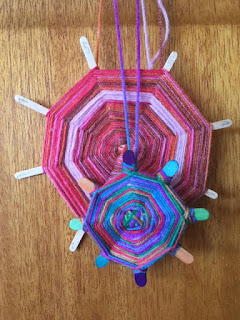 We were also treated to Karen W's bags and other partial projects, Elaine's  hand work, Jenny's dressed cats and more. I hope to have pictures of them all soon.

I was having difficulties actually adding pictures to my blogs but have now found a way around the problem so send in your Lockdown project pictures for us all to be inspired by.
Posted by Ma Betty at 8:57 AM No comments:

Show and Tell from Helen

As Helen cannot join us today for our Zoom gathering she has sent a photo of the quilt she has recently finished using lots of scraps. 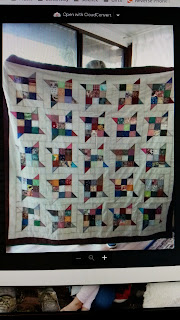 Unfortunately the photo Helen sent was not recognised by my blog so I have had to photograph the photo on my computer. I've left all the extraneous bits to laugh at. I suppose I could have taken a screen shot.

I found another quilt on the web that is also an idea for using lots of scraps. Again the image is refusing to come in so I took a screen shot this time but no luck so another photo of my computer screen using my phone. 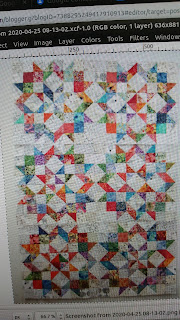 UFOs and PhDs in Lockdown

There has not been much activity as a group lately but I think I'd like to change that and have a Zoom get together soon. More details via email.

I've now been in self-isolation for over 5 weeks because I am an old lady! My "children" are making sure I have access to everything I need and last night we even had a Zoom family dinner. This time has given me lots of opportunities for huge garden make overs especially in the chook yard but has also provided the opportunity for patchwork experiments and PhDs.

I am currently using lots of my 1.5" leaders and enders that have already been sewn into 4-patches. I am putting blocks up on the design wall as I go and am quite pleased with the results so far. 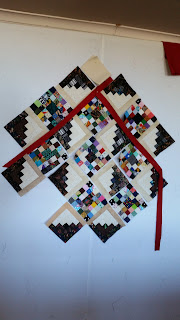 I have just pinned the maroon strip on to see what sashing looks like on it. I'll choose a final colour when I decide who it is for. However, I do rather like the maroon. I have tried to avoid bright yellow in the leader and ender blocks and am using my scrap strips for the log cabin blocks in blacks and creams.

I have also been enjoying handsewing whilst listening to episodes of Friendship Album 1933, one of the books on the Quilt Fiction website.

Together with my Zoom pilates, Viral choir experiments and Skype and Zoom meals and morning teas I'd like to add a bit of communal sewing with you all so "see" you soon.
Posted by Ma Betty at 6:03 AM No comments:

Some show and tell from Christine

Christine emailed me today showing some projects that have been keeping her busy.

A log cabin quilt top made from scrappy leftovers, a journal cover for her grand daughter's birthday, and a rather long term UFO - a  piece of needle turn applique from a work shop with Margaret Sampson George done last year. 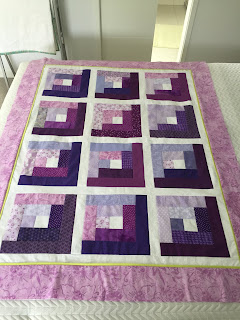 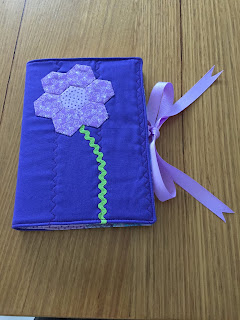 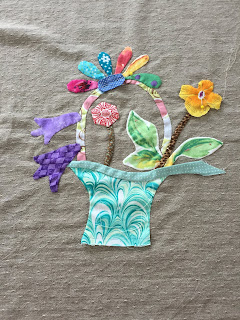 Thanks Christine. I love them all.

Don't forget to send me your projects for our virtual show and tell.
Posted by Ma Betty at 3:55 PM No comments: